The comfort of blithe notes

Leo Smit came from a mixed Sephardic Ashkenazi family. His father, Rephaël Smit, was a wealthy shoe merchant descending from the Ashkenazi Smit family. The other three grandparents, two of which were also cousins, descended from the Sephardic Ricardo family. Leo's grandfather, Jozef David Smit, was a teacher and cantor in the synagogue. Leo was raised in a mainly secularized family in which there was hardly any connection to Jewish tradition, which is reflected in the names of both children: Leopold and Eleonore Josephine.

He briefly taught harmony and analysis at the Amsterdam Conservatory, but in 1927, Leo moved to Paris to broaden his musical horizons. Connections with the Netherlands remained intact and he received several lucrative commissions. His music for the anniversary games of the universities of Leiden and Delft attracted a lot of attention. Smit also wrote music for film, a new genre for an industry still in its infancy. A major success was his music for Charley Huguenot van der Linden's film Jonge Harten (Young Hearts). In Paris, he was a keen observer of everything around him, and he worked hard, accompanying singers and dancers in various nightclubs. Leo was “the right man in the right place” because he easily played by heart and, on request, improvised in a variety of styles. He even toured North Africa with two dancers.

Unlike many of his Dutch colleagues, Smit didn't have to deal with a daily struggle to survive. He married Lientje de Vries in 1933, they lived in a chique apartment near the Seine, opposite the Eiffel Tower and were financially supported by their wealthy families. Leo frequented all kinds of musical events and had inspirational encounters with the composers of the time, like Darius Milhaud and Erwin Schulhoff.

The Quintet (1929) was the last of Smit's works to be premiered in Paris. At the Amsterdam Concertgebouw, Monteux conducted the premiere of Schemselnihar and Van Beinum the Concertino for Harp. The Sextuor also was performed with van Beinum at the piano. Just before the war it seemed that Smit's career came to a halt, not only in France but also in the Netherlands. Monteux, Van Beinum and Dresden stopped programming his works and there didn’t seem to be a suitable infrastructure for Leo Smit’s music in or outside the Netherlands. He was no exception; practically no composer could make a living by the pen.

At the end of 1936, the Smits moved from Paris to Brussels and in November 1937, they were back in Amsterdam due to family circumstances. Shortly after, his mother died. La Mort for soprano and alto with piano accompaniment (text by Baudelaire) refers to this occasion.

On April 24, 1940 Smit’s Concerto for viola and string orchestra was performed in the Concertgebouw. Two weeks later World War II broke out and Jewish musicians and composers were barred from all important venues and their music was now rarely performed in public. Smit's compositions written in the years 1940-1943 reflect this significant loss of freedom. It was music for the home or for teaching purposes: 12 pieces for four hands, Divertimento for piano four hands, a Flute Sonata and a String Quartet. For these works, Smit used ideas he had written down years before.

Leo Smit was never concerned with Judaism or with Palestine, not in his music nor in his choice of poetry. But in July 1942, he started teaching piano and composition at the recently established school for chazzanim (cantors in the synagogue). The New Jewish Chamber Orchestra performed his Concertino for cello and orchestra on November 24, 1941 in the Joodse Schouwburg (Jewish Theatre), formerly known as the Hollandsche Schouwburg (Dutch Theatre) on the Plantage Middenlaan. Access was restricted to a Jewish audience.

In November 1942, Leo and Lientje were forced to move from the Rivierenbuurt neighborhood to the Transvaal neighborhood, a deportation district in the east of Amsterdam. In March 1943, they were summoned to the Jewish Theatre (today again known as Hollandsche Schouwburg and National Holocaust Memorial), then transported to Westerbork. By the end of April they were transported to Sobibor and murdered upon arrival.

Smit's oeuvre is small but compelling. His musical orientation is thoroughly French. The titles of some compositions refer to Ravel and Debussy. Smit’s Schemselnihar and Ravel's Shéhérazade are both inspired by Arabian tales. The song Kleine Prelude van Ravel on a text by Martinus Nijhoff, can be regarded as his tribute to the French master who died in 1937.  Like Ravel, he used the forlane rhythm in various compositions. The Trio for flute, viola and harp honors Debussy's version, but only in the instrumentation. The same applies to the Concerto for piano and wind instruments which can be compared to Stravinsky's composition. Here too, aside from jazz influences and use of choral tones, the musical worlds of the two composers are far apart. In comparison to Stravinsky, Smit's decorative themes have more tenderness and color, and his use of bitonality (the use of two keys simultaneously) is closer to Milhaud's technique. There are obvious influences of jazz and light music (foxtrot, charleston and rumba) and Smit was particularly fond of George Gershwin, often citing the popular song The man I love.

Leo Smit's most neoclassical piece is the Symphony in C. Here Mozartian themes are put through a bitonal wringer, making it sound distinctively Smit. The same applies to the Divertimento for piano four hands, although more jazzy in character. This Divertimento was a result of his continuous playing – with students – piano excerpts of Mozart Symphonies. Smit’s fugue technique in this piece and later works is often angular, but likewise, playful and charming.In the Trio for clarinet, viola and piano, broadly developed and sensuous melodies tend to prevail.

The works most often played during his lifetime were Trio for flute, viola and harp and Quintet for flute, violin, viola, cello and harp. The Quintet was programmed in Paris at a concert of the smi (Société Musicale Indépendante), on recommendation of Ravel, among others. The Dutch Instrumental Quintet, established by harpist Rosa Spier, performed this piece a dozen times during their Polish tour in the fall of 1929. The Concertino for harp and orchestra was dedicated to Rosa Spier, a great promoter of his music. Leo’s sister Nora was a student of Rosa Spier and in the Smit's family home was a beautiful harp, which explains Leo's predilection and understanding of this instrument.

What makes Leo Smit's music so unique? He is not ponderous and his music sounds fresh and carefree. Many of his works are written in an easy C major, often containing elements of light music and jazz, which at that time was rather unconventional in the Netherlands. Smit has an idiomatic awareness of style and is in full knowledge of the piano, flute, clarinet, viola and harp. Through the years, especially after 1935, his palette became darker, more serious and communicative. This is evident in the song cycle La mort and the Flute Sonata. At first critics called Smit “one of our most talented young composers,” praising his ease of writing but also detecting a lack of depth. It all sounded too easy, it wasn't profound enough, and consequently, not good. That was maybe understandable at a time when constructivists like Pijper and Badings were setting the tone. But Smit stated that he worked exceedingly slow, engaged in trial and error. He endlessly tried to integrate 'themes' which he had noted down years before in one of his many “Thematic Study Books.” It is a miracle that his music always sounds as if it has been conceived in a single breath.

In 1943, the survival of Smit's oeuvre trembled in the balance. Only four compositions were published during his lifetime. His orchestral works and the majority of chamber music, including his best compositions, only existed in manuscript format. At the beginning of 1943, Smit must have had a premonition of things to come: he deposited a pile of compositions with his pupil Frits Zuiderweg. As a precaution he had removed the title pages and his name. And at the last moment, two boxes with books on composition and his own thematic studies, were deposited with Daniel Ruyneman. It appears that Smit's entire oeuvre has been preserved.

After the war Smit's music was performed only occasionally; usually by musicians who had known him. Around 1955 Smit's melodious style became unfashionable: composers of the postwar generation, with their new and experimental techniques, became the leading figures. However Smit's Flute Sonata never completely vanished and had built its reputation within a small circle, played by prominent flutists like Koos Verheul and Abbie de Quant. The celebrated flutist Eleonore Pameijer, finally highlighted this piece in 1994. Accompanied on piano first by Frans van Ruth and later Marcel Worms, it was recorded several times on CD.  The “Lento” with its sensuous melodic line, is extremely captivating. It was Leo Smit's last completed composition, before he was condemned to silence in 1943. On April 15, 2014, at the unveiling of a monument (two Stolpersteine) in the Eendrachtstraat in Amsterdam, the last residence of Leo and Lientje Smit, Pameijer played the “Lento” unaccompanied in the open air.

In 2000, Smit's centenary was commemorated with the release of a collection of four CDs with his chamber music and orchestral works: Leo Smit Complete Works. A year later Smit's kaleidoscopic biography Silhouettes by Jurjen Vis was published, an account of the search for the man behind the music. 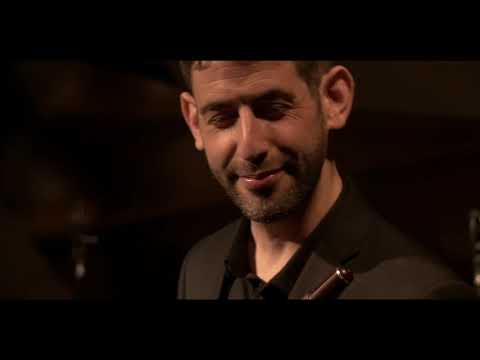