Franz Weisz (Weisz Ferenc in Hungarian) decided to leave his home country Hungary due to the political situation and overt anti-Semitism. In the Netherlands he enjoyed two decades of freedom and musical possibilities, but then as a Jew, he was interned in camp Westerbork  and later deported to Theresienstadt and Auschwitz. The second inevitable displacement led to his death. Weisz was a great pianist who left behind an oeuvre of several virtuoso piano pieces.

“I’m not involved in politics;  I have nothing to fear”

Born in Budapest on August 2, 1893, Ferenc was the third son of Ignaz Weisz and Terezia Friedman. He was a musical prodigy; at the age of eleven he was already a student at the Nemzeti Zenede, the National Conservatory. He studied piano with Stephan Tomka and composition with Karoly Agghazy, both former students of Franz Liszt. In 1914, Ferenc completed his education with excellent results in both fields.

During World War I, Hungary fought on Austria's side and lost. It is unknown whether Ferenc participated. After the war, the political situation worsened: a split off from Austria, revolution and counter-revolution, a rapid succession of rulers, first a left-radical (Bela Kun), then a conservative (Miklós Horthy), and overt anti-Semitism. It is likely that Ferenc gave piano lessons at this time, maybe even recitals (although Jewish musicians were increasingly barred). In 1919, he was appointed as teacher at the Conservatory in Budapest. He left for the Netherlands in 1920.

The family story goes that “during a concert tour” in 1920, Ferenc chose to stay in Amsterdam, but the reality was probably less romantic. His fame as a pianist was not such that an international concert tour was plausible. His older brother Simon had preceded him to the Netherlands and his aunt, married to an Amsterdam diamond worker, had lived there for the past forty years. Amsterdam seemed to be a safe haven shortly after World War I, the Netherlands having remained neutral.

Ferenc was embraced by his ever growing family in Amsterdam. "Uncle Ferri” was a welcome guest in his brother Simon's home, always present when Hungarian goulash was on the menu.

As a pianist, Ferenc quickly fit into the Amsterdam music scene, between several other Hungarian exiles. One of them, the violinist Alfred Indig, who like Ferenc had graduated from the National Conservatory, was now a member of the Concertgebouw Orchestra. In 1922, the two of them gave a concert in the Recital Hall of the Concertgebouw. The accompaniment by Franz Weisz, as he was called in the Netherlands, was, according to the nrc newspaper review, too timid, but technically good.

A year later he accompanied Indig again in The Hague at a charity event for a Hungarian opera singer. It was the first time that he played his own music for a Dutch audience: “warm, naturally flowing sounds with a Letzte Rose theme and some pleasing etudes” according to a critic. In the mid 1920s, Franz Weisz formed a duo with the Russian/Dutch violinist Alexander Moskowsky.

An important contact around this time was the renowned pianist and composer Dirk Schäfer. In a commemorative book published a year after Schäfer's death (1932),  Franz Weisz wrote about his admiration for Schäfer's piano playing, his tireless diligence in pursuit of perfection and he quoted Schäfer's motto: “Immer vollkommener!”

In January 1925, he was admitted to the Society of Dutch Composers (GeNeCo).  For a number of years, he submitted a list of his new compositions to the Dutch bureau of music copyrights (Buma). His first list of works in January 1926, contained 24 titles: compositions for orchestra, piano, violin or cello with accompaniment, a piano trio and 12 piano pieces.

The following year, eight titles were added, mainly works for piano solo. In April 1929, he added “60 Klavier Etüden (Hochschule)” to his oeuvre. Everything up to this time in manuscript form. However, in January 1930, he proudly wrote to the Buma that the five compositions of his opus 1-3 (1913-1924) had been published by Rózsavölgyi & Co. in Budapest.

Recognition as a music educator, pianist and composer

From the outset Franz Weisz was the major advocate of his own work. In public, he only played his own compositions. During a concert of the Schola Cantorum choir conducted by Hubert Cuypers at the Concertgebouw (November, 1931), he played the Suite and two Konzertetüden from his recent work published in Budapest. For the first time he was described by the critics as one of the leading Amsterdam piano pedagogues, and was praised not only for his performance, but also for his compositional talent: “an addition to the virtuoso repertoire.” A few months later, in an angry letter to the Buma, Weisz commented on the excessive copyrights of ƒ 42 that Schola Cantorum had to pay, while he as a composer, only received a pitiful sum of ƒ 11,41. Weisz was very precise not only in his piano playing, but also in his correspondence. Buma replied with an explanation, but gave no compensation.

Franz Weisz reported in 1932 to the Buma that he was now a “Dutch citizen.” In 1934, he began a fruitful collaboration with Olga Moskowsky-Elias, concert pianist and teacher at the Amsterdam Music Lyceum. In their concerts and radio appearances they played classical and contemporary works: they premiered Darius Milhaud's Scaramouche, in 1938. There was always a prominent place for Weisz's own compositions for solo piano, two pianos or piano trio. Generally the critics reviewed his piano playing as virtuoso, clever, conscientious, but also detached and lacking “emotion.”  The same applied to his compositions: “well constructed, logical, characteristic,” but “somewhat academic,” and obviously educated in the tradition of Liszt. Pianist Henri Nijsten characterized Weisz's music as “whimsical, virtuoso, richly ornamented, a mix of late romanticism and quasi-improvised salon music with a touch of impressionism, not akin to Bartók” (epta Piano Bulletin, vol. 29, 2011/2). Olga Moskowsky introduced Franz Weisz into the circle of musicians associated with the Amsterdam Music Lyceum. In 1938, Franz Weisz and Jo Goudsmit were appointed as assistants to Alexander Borovsky, the world-famous pianist, who gave a master course at the Amsterdam Music Lyceum.

At his home, Weisz gave private piano lessons. One of his students was Niek Verkruisen, whose father had a piano business on the Stadhouderskade, which Franz Weisz frequented. In a German antiquarian music bookshop, a copy of the Concertetudes opus 1 was recently discovered, containing a dedication:  “An meine Schülerin Chel Spijer, herzlichst von Franz Weisz, Amsterdam, 17 Juni 1932.”

On March 15, 1940, Olga and Franz gave their last duo concert at the Amsterdam Music Lyceum. According to the music critic of De Tijd the program was “overloaded”: three works for two pianos and at least five for four-handed piano. “A fragmented evening, but their performance made up for a lot.” The daily De Telegraaf critic L.M.G. Arntzenius experienced a “lack of emotion” and was not enthousiastic about the program, but the “skillful, harmonious and pleasing Humoreske by Franz Weisz was convincing.” This Humoreske for two pianos was composed in 1939, according to Weisz's last Buma entry on March 6, 1940.

On April 13, 1940,  Karel Mengelberg, secretary of the Society of Dutch Composers (GeNeCO), called upon all members to “deposit two or three compositions” to the Municipal Museum in the Hague, “given the threat of war and the impending danger from the sky.” Weisz answered that since his oeuvre comprised “eighty to a hundred piano works,” he would like to know the maximum number of pages instead of compositions, as the latter differed in length. In response to Mengelberg's request to propose appropriate works for the major Dutch venues, Weisz selected three works  “the quality of which I can guarantee: a Piano trio, a Rhapsody for piano and orchestra, and a Fable for cello and orchestra.”

GeNeCo compiled a list of orchestral works, including the Rhapsody and Fable, in order to promote Dutch music in the concert halls. On July 8, 1940, Mengelberg finally wrote: “Would you kindly send us the works you referred to. We will ensure that these manuscripts are sent to the Municipal Museum in The Hague.” Nothing in the archives in The Hague nor in those of GeNeCo indicates that this transfer ever took place.

Now that the occupation was a fact, Jewish citizens were increasingly excluded from  everyday life. Franz Weisz continued teaching, at home and at the Amsterdam Music Lyceum, even after Borovsky's flight to America in 1940. He composed a lot: according to his former students, he was always writing music, even during classes. Weisz ignored the advice to go into hiding: “I am only a piano player and I have never been involved in politics - I have nothing to fear.” In January 1942, due to the new regulation that prohibited Jews to be members of associations, Weisz had to cancel his GeNeCo membership.

Weisz was baptized on October 4, 1942, in the Dutch Reformed Prinsessekerk at Amsterdam; and was therefore “bis auf weiteres von Arbeitseinsatz freigestellt” (freed from working for the Germans for the time being). During the war, he had to move at least six times, hunted like an animal. His last residence was Deurloostraat 74, Evalina Cardozo's home. She was  a pianist, and allegedly his lover. When piano student Niek Verkruisen went to their house for his regular piano lesson at the end of  May 1943, no one answered the door; both Franz and Evalina were “picked up.” Franz was transported to Westerbork and would survive for 16 months. Evalina died in Sobibor on May 28, 1943.

Weisz arrived in Westerbork on May 26, 1943. A few weeks later, piano dealer Verkruisen received a telephone call  (a request “on behalf of Franz Weisz”) to repair some pianos at the Westerbork camp. During that visit, Weisz showed his damaged hands to Verkruisen; he was pleased the camp commander had “promoted” him from garbage man to pianist.

Weisz Ferencz was transported from Theresienstadt to Auschwitz on September 28, 1944, and was murdered, two days later, on September 30, 1944.

On March 9, 1946, during the first GeNeCo board meeting after the liberation, the board members commemorated the composers who died in the Holocaust, among them Franz Weisz. In 1961, pianist Jaap Drielsma honored his teacher by playing Weisz's first Konzertetüde in a recital for avro radio. Decades later Niek Verkruisen began research on his former piano teacher. This resulted in a meeting with family members and the discovery of a pile of manuscripts, containing more or less completed piano compositions (a.o. a Scherzo, Carnaval and Humoresque for piano solo). The works published in Budapest are also preserved, but all other compositions by Franz Weisz, including his successful Klavier Trio, works for solo instruments with orchestra and numerous piano pieces, are lost. Probably a matter of “music theft” by the special task force responsible for clearing out the homes of deported Jewish musicians.

Thanks to all staff of these organisations and to Henri Nijsten (pianist and fellow-researcher), Jan Jaap Kassies (guardian of our musical heritage, staff MCO-library) and Agnes Kory (Béla Bartók Centre for Musicianship, London) 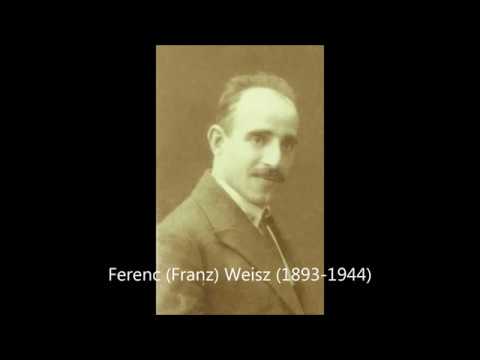 Search for Ferenc/Franz Weisz on amazon.com