Julius Hijman's life centered around contemporary and Dutch music. Touring internationally, he presented the works of Dutch composers, and in the Netherlands he introduced new music from abroad. His own compositions were not always appreciated by his peers. He fled into exile in 1939 to America and was forgotten in his native country. The majority of his extensive oeuvre remains unpublished, awaiting performance.

Julius Hijman was born on January 25, 1901 in Almelo, at that time a town with a prosperous textile industry.  His Jewish parents, the physician Leopold Hijman and Catherina Lion were part of the local notables and had many friends among the local captains of industry. Julius and his younger sister Renée had piano lessons at an early age. He was talented and continued to study privately with a renowned concert pianist in Hilversum; a long trip from home for the youngster. At sixteen he even moved to Amsterdam, but his adventure in the big city only lasted six months. Then he moved to Bussum, a small town near Utrecht, and continued developing his talent. In 1922, he became a member of the Utrecht Kwant Trio and then again made the leap to Amsterdam. This time he began studying piano with Dirk Schäfer, whom he greatly admired, and he studied composition and music theory with Sem Dresden.

In the 1920s, Hijman emerged as an ardent advocate of contemporary music. He formed a duo with cellist Henk van Wezel. Then in quick succession, both his parents died and he left the Netherlands to continue his studies with Paul Weingartner in Vienna. There he found the love of his life, Margarete Safir; the couple married in January 1926.

But Amsterdam was on his mind and 1928, he and Van Wezel even had their own concert series focusing on contemporary music, including works by composers like Eisler, Hindemith, Kodály and Bartók.  During a “Romantic Evening” at the Amsterdam Art Society De Kunstkring, the duo had the audacity to perform ultra modern music by Reger and Hindemith. In Paris, Hijman promoted his Dutch contemporaries at concerts with music by Pijper, Vermeulen and Badings. As a member of the Dutch Society for Contemporary Music, he was influential in organizing the exchange programs of concerts in the Netherlands, Belgium and Austria.

In the autumn of 1930, Hijman went on a study trip to the Soviet Union. In nine concerts in Moscow, Leningrad and other cities, he, together with an ensemble of Russian musicians featured Dutch composers. Shortly after, he and his wife moved to Berlin and he started studying at the university and reported on local musical life for the Dutch periodical Caecilia and Het Muziekcollege. Together with composers Edgard Varèse, Henry Cowell and others, he formed a committee promoting the international exchange of contemporary music.

Hijman's preference for contemporary music was not always appreciated. The critic of  the newspaper Het Vaderland wrote: “Next time Schäfer's promising student of should introduce himself with a more enjoyable program. Brahms was given a warm response, but the reception of today's composers was as cold as ice.” The critic of the daily De Telegraaf however, was positive: “Julius Hijman and Henk van Wezel are exemplary promoters of modern music. With their attractive programs, enthusiastic perseverance and sophisticated performance they were utterly convincing!”

When Hitler seized power in 1933, the composer and his wife left Berlin. Already in the early 1920s, Julius expressed his anti-militaristic and pacifist ideals, and although he was non-observant, his Jewish origin was sufficient reason to worry about the Nazi regime. Just a few weeks back in Amsterdam, he started working on exchange concerts with Dutch, Czech and Hungarian contemporary composers. In December of that year, he was one of the four soloists to perform the Dutch premiere of Stravinsky's Les Noces in the version for four pianos.

Hijman’s first composition, a piano trio, was written in his Berlin period. From that moment on, a steady stream of music would flow from his pen. In 1934, he performed, together with violinist Alexander Moskowsky his Sonata for violin and piano for the first time in front of an audience. But the work hardly pleased the critic of the daily Algemeen Handelsblad. Hijman  didn't mind; a month later his Violin Sonata was performed in Budapest at an international exchange concert, and several of his songs premiered at a concert of the Dutch Society for Contemporary Music dedicated to the Dutch art song. Reviews differed on the Sonata for saxophone and piano of that same year. One critic mentions the “somewhat forced bizarreness,” another enjoyed the “very precise and beautiful sound.” As long as there wasn't a publisher interested in his music, Hijman had enough entrepreneurial spirit to publish his own music. A review of his self-published Sonatine for piano appeared in Caecilia en De Muziek: “Melodically somewhat dry and in harmony sour, but catchy enough.” Hijman's Cello Sonata premiered in January 1936. His self-confidence was sufficient to draw the Concertgebouw Orchestra's attention to his first orchestral work, the Symphonic Suite, but  unfortunately to no avail.

As a composer, Julius had the same determination that characterized him as a musician. He continued creating new works, despite negative reviews. And successfully: in 1937, Broekmans & Van Poppel published his Sonatine for piano. De Telegraaf was positive: “Hijman has delivered a well-written piece deserving the attention of our pianists.” De Tijd spoke of  “a fascinating, and in many respects, convincing plea.”

Virtually every month he played music of his contemporaries, including his own works, somewhere in Europe. With Luctor Ponse and the Dutch Chamber Orchestra he performed Stravinsky's Concerto for Two Pianos in October 1938. A few weeks later, Hijman and composer Wolfgang Wijdeveld organized a concert featuring their music. But in his own country, people didn't appreciate this advocate of modern music. The critic of the daily Algemeen Handelsblad felt “too much domination of the cerebral” and De Telegraaf reacted passionately against the “Vienna-orientated Hijman, who is from top to bottom and in heart and soul a ‘problematic musician.” At that time he also played Chopin, Schubert and Haydn, with orchestras and on the radio, and composed “ontspanningsmuziek” (entertainment music) for radio shows and even music for a puppet theater.

Despite the critical reviews, Hijman remained determined to promote contemporary music. He founded the Amsterdam Instrumental Sextet, and Dutch composers were especially encouraged to submit their new works. In June 1938, he played his Saxophone sonatine and Cello sonata in the Salle de Debussy in Paris. Also programmed was a piano concerto by the “German Wolf Simoni” who was soloist himself.  Since no orchestra was available, the score was arranged for piano four hands; no doubt Julius Hijman played one of the grand pianos. This concert was the beginning of their lifelong friendship. In the spring of 1939, Hijman was in Paris several times for concerts. The host of the French Association noted that “the Dutch, so capable of defending their territory also know how to defend their culture.” But Julius probably anticipated the German invasion. In the summer of 1939, Julius, his wife and their four year old son left Amsterdam behind and embarked for New York. In America he resumed his musical activities with other Dutch musicians who had made the great crossing. With Bernard Wagenaar, Paul F. Sanders and Max Tak he founded the Committee for Netherlands Music. In December, an all-Dutch program was performed at Princeton University. And he would organize another fourteen concerts with Dutch music during the period that he was cut off from his home country.

In the United States he was employed at the Philadelphia Music Academy and other music institutions teaching theory and composition and he received an honorary doctorate in music from the New York College of Music.

The next nine years he stayed in contact with his European friends via exchanges of letters. According to his correspondence with Wolf Simoni, he attempted to help his friend emigrate to the United States. He didn't succeed, but Simoni survived the war and later acquired French citizenship under the name Louis Saguer. In the summer of 1948, Hijman finally ventured on a trip to Europe. In Amsterdam, he gave a recital of works by contemporary American composers like Copland and Gershwin, and for convenience's sake he included himself and Wagenaar on the program. Composing was now of supreme importance; on his trip back to New York aboard the ocean liner Nieuw Amsterdam, he composed Minutes – 7 mélodies pour chant et piano.

Hijman continued visiting Europe and reported frequently about the American music world in the Dutch newspaper nrc. Occasionally his concerts were broadcasted on the Dutch radio, but his own music was seldom performed in the Netherlands. On the other hand, his love for the music of his native country never diminished. Hijman was well informed about musical developments in the Netherlands and continued organizing concerts with contemporary Dutch music in his new homeland. To that end, a concert at the Philadelphia Music Academy in 1954 included a violin sonata by Jurriaan Andriessen, and Willem Pijper was commemorated in the presence of Eduard van Beinum, conductor of the Concertgebouw Orchestra. Hijman dedicated his Symphony in 1953 to Van Beinum, but it never came to a performance. His former teacher Dirk Schäfer was commemorated with a sonata broadcasted in New York. At Vassar College, he organized a concert with works by Flothuis, Schäfer, Wagenaar, Mengelberg, Pijper and Van Praag.

At the start of his career, Julius Hijman published regularly about music, both for colleagues and for music enthusiasts. From abroad he wrote various articles for the magazine Caecilia. He had strong views, evident in his view on Kurt Weill's music:

In Western Europe, few had that courage, as simplicity has been associated with Marxism, and the civilized concertgoer usually reacts with arrogant retort. But I can assure you that Schubert and Brahms are equally folksy and simple, not to mention their sentimental songs. In Western Europe they still haven’t realized how desperately we need this simplicity.How necessary that is, in order to counteract the extreme intellectualism and extreme individualism of our music. Necessary, in terms of music, to counter chromatization, canonization, the lackluster game with lobsters, mirrors, and mirrors of lobsters.

Hijmans booklet about the Second Viennese School of Schönberg, Webern and Berg was widely praised. He wrote program notes for many of the Concertgebouw Orchestra concerts. He brought the subscribers of the weekly magazine avro Radiobode up to date on the music that was broadcasted. His last contributions as a Dutch music correspondent in New York were published posthumously by the newspaper nrc .

Julius Hijman died unexpectedly of a heart attack on January 8, 1969, in New York. His widow sent the majority of his manuscripts to the Royal Library in The Hague and some to his younger sister Renée, who also lived in The Hague.

Julius Hijman’s large oeuvre consists of 120 piano works, 10 orchestral works, 18 choral compositions, 50 songs and 42 chamber music works. As a composer he was a classicist as well as an innovator, giving his works conventional titles like sonata, suite, romance or mazurka. Gradually his classical style became more chromatic and modern with innovative and powerful harmonies that are somewhat akin to the music of Max Reger. 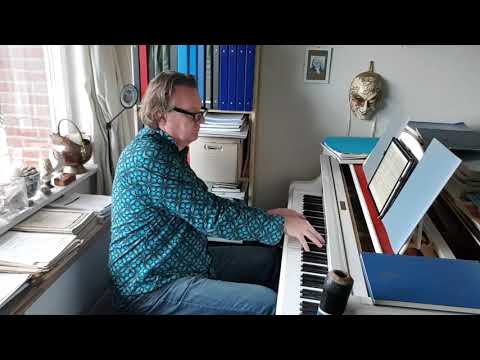 Search for Julius Hijman on amazon.com