On December 11, 1942, Samuel Schuijer was murdered in Auschwitz. His home and music school had been plundered by the Nazis. With the loss of his life and destruction of his belongings, all traces of this significant Dutch musician seemed to be erased. But a group of children in The Hague found a box containing music manuscripts, waiting for the garbage truck. They took their treasure home and it became the first step in rediscovering a lost fragment of Dutch music history.

Samuel Schuijer was born in The Hague on September 9, 1873, son of Roosje van Kam and Abraham Schuijer. The family had a jewelry store on the Heerengracht 18. Five of the nine Schuijer children became professional musicians. Sam studied violin, cello, bassoon and music theory at the Royal Conservatory in The Hague. Shortly after graduating, he worked primarily as the principal bassoonist in various Dutch orchestras and also made a European tour with the Eduard Strauss orchestra as principal solo bassoonist. In 1894, he married Elizabeth Alter, an opera singer and actress. They had three sons: Abraham (pianist), Marinus, who died in infancy and Louis (cellist).

In 1902, Schuijer was appointed chef d’orchestre at the operahouse in Ghent, Belgium for the opéra comique and operetta, and also worked for some time in Paris. He settled permanently in The Hague in 1916, and conducted the Kurhaus Orchestra. During the evening suppers at the luxurious Kurhaus Hotel, he performed into the early hours with the greatly loved cabaret artists Louis Davids and Margie Morris; their trio became known as “he, she and the piano.” As of 1918, he was second Kapellmeister and répétiteur of the French opera in The Hague. Schuijer acquired a reputation as a conductor, composer, violinist and as the owner of Sam Schuijer's Music School.

In the first decades of the twentieth century, Schuijer already composed numerous songs “in the popular genre.” His work was often awarded by the Flemish Willemsfonds. And although his own music dramas and operas were performed successfully in that period, he did not earn enough to support his family with composing.

In the 1920s, Schuijer formed his own orchestra and played in various restaurants like the cafe restaurant Hollandais and the hotel restaurant De Twee Steden in The Hague. He also provided the music to accompany the film Robin Hood with Douglas Fairbanks, and other films and theatre productions in the Odeon Theater. In 1923, Schuijer was appointed to the board of the Dutch branch of the French copyright society sacem. With violinist Eddy Waisvisz, viola player Sal Wertheim, and his son Louis, a succesful cellist, he formed the Residentie String Quartet, performing the classics; from Schubert and Haydn to Smetana and Debussy, but always including a Dutch composer on their programs.

In December 1925, he advertised in the local newspaper Het Vaderland that the Sam Schuijer Music School, on the Oranjeplein in The Hague, was now offering piano, violin, theory and singing lessons. In the spring of 1927, the school moved to the Laan van Meerdervoort and the curriculum for beginners and advanced students expanded significantly with lessons for wind and string instruments, composition, conducting and music history. The school aimed to provide ‘Excellent lessons, from accredited first-rate teachers and at affordable prices.’ Next to Samuel and his son Louis, teachers included Sophie Haase-Pieneman (voice), Anton Witek (master course violin), Ella Alter (dance) and Richard Heuckeroth (opera).

Meanwhile Schuijer continued conducting several orchestras. In 1927, he led the  The Hague Philharmonic in music by Honegger, accompanying the film Napoleon at the Kurhaus. It was a shambles: the film kept getting stuck, musicians did not have a grip on the musical material and Schuijer conducted from a violin part. Honegger's music didn't make sense to anyone. Nevertheless, Sam Schuijer was a prominent and multi-faceted musician in the  pre-war years in The Hague.

His significance as a composer is less clear; there was minimal interest in Dutch music in the concert halls at that time. Even his well-known colleagues Dopper and Wagenaar, who later managed to get their names into Dutch music history books, were barely programmed. Schuijer openly expressed his outrage about this in an interview. He was unable to persuade the The Hague Philharmonic to perform his award-winning Preludium. And so he organized and conducted the premiere of the piece in Stuttgart with the Philharmonisch Orchester in an entirely Dutch program which included, among others the overture of the Driekoningenavond (Epiphany) by Johan Wagenaar.

Schuijer wrote several operas and music dramas. Triomf der Liefde (Triumph of Love) was performed on April 3, 1909 by the The Hague Operetta Company with the composer conducting.  In 1915, the Dutch Opera Association was fundraiser for the production of  Schuijer's opera Madeleine, and finally after four years, the premiere took place on August 5th in the Kurhaus. The daily Algemeen Handelsblad wasn't enthusiastic about Jos. van Veen's libretto, but the music was appealing enough to salvage the opera:

Schuijer's musical adaptation is not very original, but this composer understands his craft, and here and there he successfully captures the mood, so that Madeleine can be welcomed as a novelty. With standing ovations and flowers, the composer and lyricist were lauded by the Kurhaus audience.

The critic of the daily De Telegraaf, judging the music as conventional and more French-Italian than Dutch wrote:

Schuijer's music has some quality with its skillful instrumentation. The various themes relating to different forms of love (selflessness, sensuality and sacrifice) are immediately recognizable and clearly expressed in the melodic structure. Both these themes and other dramatic effects are apparent, making it real opera music. Sam Schuyer one of the few Dutch composers capable of writing a dramatic melody, decorating it with various instrumental effects. A man of the theatre in heart and soul, who, with his Madeleine-music, however conventional, captivated me.

The intermezzo from this opera, entitled Liebesopfer, was published by the Hannover based Musikverlag Louis Oertel, arranged for salon orchestra, symphony orchestra and wind band. Schuijer composed more music dramas, like Salomé  (before 1908) and Schillers Handschuh for bass voice and orchestra. But it wasn't easy to get these works staged. It is unclear whether the opera Blank en Rood (White and Red) – about Red Indians and the Wild West – was ever performed. Its manuscript was also in that cardboard box, however incomplete.

Schuijer's compositions for orchestra were frequently awarded by sacem and performed abroad. In August 1933, the award-winning Rhapsodische muziek voor orkest premiered in the Netherlands with the The Hague Philharmonic conducted by Carl Schuricht, to whom this work was dedicated. The conductor “expressed his delight about the success of this wonderful work.”

On Schuijer's sixtieth birthday, a journalist from the daily Het Volk typified him as “a humble worker, who, like every honest artisan, practices his profession in solitude and with great love.”  Born in 1873, Schuijer belonged to the generation of composers firmly rooted in the nineteenth century. After World War I, their style was entirely out of fashion. But Schuijer was always in touch with the music of his time, even visited jazz concerts, listening keenly to the musical developments. In newspaper Het Vaderland he wrote:

Usually we hear a chaos of sounds; a deafening cacophony. [...] However, the Queens Melodists (a jazz orchestra based in The Hague) really use their ears. No platitudes, no roaring tuba, no sliding trombone, no niggling of the saxophone or clarinet, no cracked trumpet, no circus drum and cymbals. They are civilized musicians; skilled, witty and have good taste ...

Schuijer was also interested in film music. His suite for large orchestra Rolprent (archaic Dutch word for movie) was intended for use by any film of choice.

In Paris, Schuijer no doubt became familiar with the French school, but unlike many of his contemporaries, it hardly influenced him. A German newspaper notes about his Music for Orchestra (1932) that it is “not lost in a motly hodgepodge, but its catching melody  shows off to full effect.” In this work, Schuijer incorporated various Dutch an Dutch-Indo folk melodies. The critic of Het Vaderland is not entirely positive stating that Debussy, with “just a few notes”  better reflects the Javanese element. Schuijer's work is “handsome and respectable,”  but “it lacks fantasy” and doesn't show “any real individuality.”

Het Vaderland reported regularly on new compositions by Schuijer and performances of his work until 1939. Then it becomes silent. The last official document is the death certificate showing that he perished in Auschwitz. A daughter of a former Schuijer piano student wrote to the Leo Smit Foundation: “My mother told me about the tragic fate of her respected piano teacher, who had suffered extreme torture in Auschwitz. We were told that both his hands were cut off.” 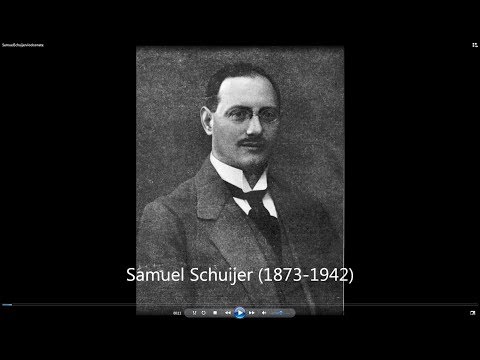 Search for Samuel Schuijer on amazon.com