Before the war, Henriette Bosmans already enjoyed a well-established reputation in Dutch musical life, especially as a pianist. During the war she was not allowed to appear in public and had to support herself with underground house concerts. Her considerable oeuvre includes orchestral works, chamber music and many songs.

Henriette, an only child, was raised in a musical environment. Her father, Henri Bosmans (1856-1896), had been principal solo cellist of the newly established Concertgebouw Orchestra. He died when she was just a baby. Her mother, a piano teacher at the Conservatory of Amsterdam, gave Henriette her first piano lessons. At seventeen she passed her final piano examination at the Maatschappij tot Bevordering der Toonkunst (Society for the Advancement of Music). She studied music theory and composition with Jan Willem Kersbergen, later followed by composition lessons with Willem Pijper, who happened to be her neighbour at the time.

In the 1930s Henriette Bosmans performed regularly with the Concertgebouw Orchestra. At one of their prestigious Thursday evening concerts in 1936, she was soloist in the Variations symphoniques by César Franck, with Willem Mengelberg conducting. Music critic Herman Rutters in the Algemeen Handelsblad praised her interpretation as: “shrewd, intuitive, with pure, vibrant and noble musicianship.”

As a woman composer she found less recognition in the Netherlands, except from colleagues and friends. Cellist Marix Loevensohn frequently performed her Poème for cello and orchestra, while Louis Zimmermann, concertmaster of the Concertgebouw Orchestra, premiered the Concert Piece for Violin and Orchestra in 1935, conducted by Willem Mengelberg. Her international breakthrough began in 1938, when violinist Willem Noske played this work, full of “Oriental moods,” in Prague and Paris. In October 1941 it was also performed several times in the United States with Ruth Posselt as violinist. However, the prospect of further international engagements became blocked by the war.

The increasing interference by the Nazis in cultural life was evident early on.  In 1933 the Maandblad voor Hedendaagsche Muziek (Monthly Magazine for Contemporary Music) published an article entitled “Terror in Germany.”  By April 1939 newspapers reported that music by Jewish composers was banned in Italy. Paradoxically, Bosmans' career as a pianist prospered, as many foreign soloists could not or dared not travel to the Netherlands. In October 1939 the French pianist Jacques Février was booked in Groningen, but due to the French mobilization he called off. Bosmans took over both his concerts. The same month she also replaced Myra Hess, who “because of the international state of affairs,” cancelled her concert with the The Hague Philharmonic.

The first years of the war

The Netherlands capitulated shortly after the German invasion in May 1940. The first year of occupation didn't seem all that bad for musicians. Late September 1940, Willem Noske played Bosmans' Concert Piece for Violin and Orchestra with the Concertgebouw Orchestra under the direction of Eduard van Beinum. The press was enthusiastic, especially because Dutch music was now more appreciated. But many Jews felt unsafe in the Netherlands and tried to leave the country. Bosmans considered exile to the United States, but at the last moment decided to stay; she didn't want to leave her elderly mother behind.

Besides paid performances, she also volunteered her services, such as playing at the Rectory of the Reformed Parish in Santpoort “for the benefit of musicians facing hardship.” Late February 1941, her  recital at the Concertgebouw in Amsterdam was cancelled; the city was in turmoil due to the widespread February Strike, with thousands of workers protesting against Jewish persecution.

Bosmans didn’t like to spend much time practicing and her technique was not always flawless. Reviews of her performance of Brahms' Second Piano Concerto with the The Hague Philharmonic in Scheveningen in July 1941 , were not altogether favorable. The Haagsche Courant (July 14, 1941):

Undoubtedly an exceptionally talented musician with a brilliant, rich tone. But these qualities were unfortunately outweighed by the muddled passage work, her messy interaction with the orchestra, and errors of a technical and rhythmical nature.

In September her performance of this piano concerto with the Concertgebouw Orchestra had improved. Piet Ketting of the Rotterdamsch Nieuwsblad on September 26, 1941:

[O]ur principal pianist excelled in Brahms' Second Concerto: her splendid performance style, the ease of gesture, controlled technique, the charm of this romantic piece, in short, all these sublime factors were fully reflected in her interpretation. She has been neglected for far too long. That's how it goes these days in the Netherlands: some are programmed too often, many others not enough.

If musicians wanted to pursue their profession, they were obliged to register as of April 1, 1941 at the Kultuurkamer, a regulatory cultural agency instated  by the German occupying forces during World War II. Bosmans was half Jewish and was registered at the Kultuurkamer as a “Jewish  Case.” At first she continued giving concerts, but in June the Concertgebouw Orchestra was informed that Bosmans was undesirable as soloist because of her “partial Jewish origin.”  Nevertheless, her rendition of Franck's Variations symphoniques in December 1941 was praised – note well – by the Deutsche Zeitung in den Niederlanden: “Einfühlungsgabe und hochwertiges Spiel erlaubten ihr eine vollkommene Wiedergabe.” (“Empathic and superior playing facilitated a perfect performance.”)

In 1942 she could no longer perform in public. In August of that year she spent a short holiday by the sea with her friend, actress Charlotte Köhler, who was also excluded from stage life. The next five months Henriette wrestled with a nerve inflammation in her leg. At the same time she collected genealogical information about her family, trying to save her mother, one of the 140,000 Dutch Jews, from persecution by the Nazis. She was terribly worried, even though Sara Benedict Bosmans was registered in the category “mixed marriages,” because her husband had been a Roman Catholic. The Germans had no uniform policy for this category, causing controversy between authorities in Berlin and The Hague. Yet mother and daughter Bosmans were scared, and with good reason. The illegal magazine Vrij Nederland described  the oppressive atmosphere in Amsterdam in October 1942:

After the clock struck eight and it became dark outside, the unbearable, excruciating waiting begins for our Jewish citizens. Each footstep frightens them [...]. German cars roam the streets, the Grüne Polizei and the Dutch accomplices begin their satanic, nocturnal business. Each night doors are opened, hunting for women, children, the elderly, the ill, etc. etc., caught like fish in a fyke, defenceless, without rights, without hope, without any help. Each night anew! [...] All are  deported and always to the same destination: death!

Meanwhile, Henriette's income had diminished. Perhaps she was financially aided   by the Central Artists Committee, where her first bosom friend, cellist Frieda Belinfante, was a staff member. Bosmans earned some at the so-called “black evenings,” underground house concerts, which were often intense experiences for both artists and audience. Venues included “a countryside villa in Wassenaar, a surgeon's home in Gouda, an Amsterdam mansion, and the home of a leather manufacturer in Waalwijk.” Once Henriette had to flee during a concert at soprano Jo Vincent's home in Overveen:

It was prohibited to have “more than twenty people at home,” a vaguely formulated and often ignored regulation; but Henriette Bosmans [...] was nearly caught at our home; luckily she managed to escape through the backyard, but all the guests were heavily fined. [1]

On September 30, 1943, members of the militant resistance group CS-6, including composer Jan van Gilse's son, Maarten, were sentenced to death and executed the following day. The Bosmans were devastated. They themselves became victims of persecution in the spring of 1944, when mother Bosmans, at the age of 83, was arrested and deported to Westerbork. Henriette immediately pleaded her mother's case with the authorities, and even went to the notorious Gestapo headquarters in the Euterpestraat in Amsterdam. As a last resort, she asked Willem Mengelberg to intervene, which resulted in her mother's release along with other mixed-married Dutch Jews.

In the autumn of 1944 trains stopped operating and Bosmans could no longer perform outside Amsterdam. Mother and daughter scraped through the harsh winter months, with the western part of the Netherlands hit by famine. In these difficult circumstances she began composing, which she hadn’t done since the death in 1935 of her fiancé, violinist Francis Koene. Clara Eggink's poem Doodenmarsch (Death March), published in the Vrij Nederlandsch Liedboek (April 1, 1944)  inspired her to write a passionate work  for narrator and piano or orchestra:  “[…] I turn to the harbour. The ships lie destroyed by fire. This ancient water lane carries blood and soot to the ocean […].” Marius Flothuis considered this as one of Bosmans' best works. Shortly thereafter she wrote a more hopeful piece, a setting for soprano and orchestra of John Henry Newman's poem Lead, kindly light.

Finally in May 1945, the misery of war was over.  According to a letter by her mother, the war had taken its toll: “Jettie looks bad, emaciated, but she is working again, that is, if everything shapes up; as yet things often aren’t working properly.” Author Simon Carmiggelt wrote in Ieder kent ze (Everyone knows them) that Bosmans and other musicians had had to “rely for years on house concerts,” but at last were free to go their own way again. Immediately after liberation, Bosmans composed and orchestrated two songs: Gebed and Daar komen de Canadezen (Prayer and Here come the Canadians), both dedicated to soprano Jo Vincent. In a packed Concertgebouw on June 9th and 10th, Jo Vincent and Bosmans celebrated Dutch liberation with Here come the Canadians. This song enjoyed considerable popularity, with many performances as a result. And on November 3, 1945, Lead, kindly light was premiered by Jo Vincent with the Amsterdam Concertgebouw Orchestra conducted by Sir Adrian Boult.

After the war, Bosmans welcomed a new creative period, inspired by mezzo-soprano Noémie Perugia. Of the twenty-five songs she wrote, influenced among others by Debussy, Ravel and Poulenc, she dedicated eleven songs to Perugia. Bosmans' frequent use of refined parlando emphasizes the lyrics, including angular twists and changing time signatures, with translucent harmonies utilizing the entire keyboard. Particularly expressive are the songs set to Paul Fort's poems about parting and death.

In 1950 she became plagued by stomach pain. In those days, a cancer diagnosis was usually withheld and Bosmans was told that she had an ulcer, for which she underwent severe surgery twice. That same year she performed for the resistance fighters who had been imprisoned in the infamous Oranje Hotel in Scheveningen. After a silent procession along death row, the ceremony continued at the Kurhaus. There an audience of some thousand people was addressed by Prime Minister Willem Drees, actress Charlotte Köhler recited Psalm 44 and Bosmans played Chopin's Marche funèbre.

On June 16, 1951, Henriette Bosmans was knighted in the Royal Order of Orange Nassau. Already too ill to participate in the Holland Festival that month, she was replaced by pianist Johan van den Boogert. The following year, after her last recital with Noémie Perugia on April 30, 1952, she collapsed and died on July 2, 1952 at the age of 56. 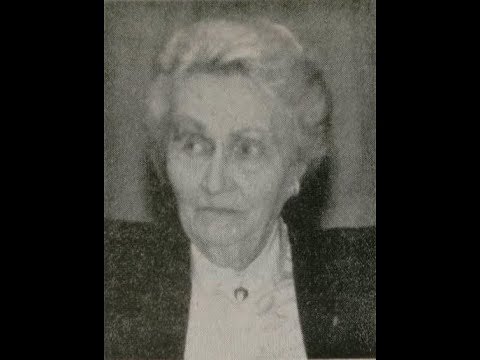 Search for Henriëtte Bosmans on amazon.com