His hometown Lemberg, in the Ukraine known as Lviv, and in Poland as Lwów, has a history of occupation by shifting powers. This is why the Germans had trouble figuring out Ignace Lilien's real identity; he survived the war with forged documents. He worked as a chemical engineer, but that didn’t stop him from composing a large oeuvre. His life was as varied as his music, with influences ranging from Polish modernism to South American rhythms and timbres.

Cosmopolitan in a boundless musical universe

Ignace Lilien was born on May 29, 1897, in multi-cultural Lemberg, at that time an Austrian city where Poles, Ukrainians and Jews were the largest communities. At the end of the nineteenth century it was a bustling metropolis; with its elegant new opera house, it was often referred to as “Little Vienna.” Around 1890, some Zionist organizations emerged but the majority of the Jewish population was assimilated. Most Jews spoke Polish, like the Lilien family, or German. Ignacy (his Polish name) was a linguistic genius. He easily expressed himself in German, French, Russian and English. His parents, Ernest Lilien and Emma Czeszer, married in 1895. Ernest was managing director of an agricultural bank and imported farm machinery from the United States and moved there in 1913. A year later the couple divorced.

Several months later, Ignacy and a friend toured Europe by bicycle to visit all the important museums. At the outbreak of World War I, he was in the Netherlands. Travelling was too dangerous and on his mother's advice, he remained in The Hague for the time being. His mother was now living in Geneva, remarried in 1916 to Conte Mario Gialina, an Italian architect. In 1919, still in the Netherlands, Ignace completed his 1st Symphony and he moved to Delft to study at the Technical University. In 1922, he obtained his degree in chemical engineering, and until his retirement in 1962 he was employed at the Chemical Products Factory (fcp) in Pernis, near Rotterdam. He never went back to Lemberg.

Ignace Lilien arrived in the Netherlands with a rich musical heritage. He had studied piano with Theodor Pollak at the highly esteemed Ludwig Marek music school. Born in 1866 in Telč in southern Moravia, Pollak had studied in Vienna with prominent teachers like Julius Epstein, Anton Door and Moriz Rosenthal. In Lemberg, Pollak's students were mainly from aristocratic and wealthy families. Among them was Stefan Askenase (1896-1985), the world-renowned Chopin interpreter, and one of Lilien's lifelong friends.  According to several sources, his teacher in harmony was H. Ehrlich. This probably refers to Hermann Ehrlich, a German cantor from Meiningen, who had settled in Lemberg and belonged to the Zionist-oriented minority of the Jewish community. A considerable number of Lilien's early works composed between 1910 and 1914 are preserved: piano etudes, preludes, ballads, nocturnes and waltzes - genres associated with Chopin - but also fugues. His songs were set to German (sometimes with a Polish translation), Polish and French texts.

The songs are the core of Liliens oeuvre: Fünf trunkene Lieder (1915), Élégie sur la mort d’une princesse enchantée (4 songs in a three tone system, 1918), Veronica. Vier Lieder (1920), Vier Bettlerlieder / Quatre Chansons des mendiants (1923). Striking is that he also wrote the lyrics and designed the covers of the sheet music for publisher Alsbach & Co. Although there is no evidence of a connection with Młoda Polska (Young Poland), a certain affinity with this modernist art movement is apparent in the songs, as well as in the First Cello Sonata (1918). This is evident in the neo-romantic and impressionistic style of the music, and the Art Nouveau covers. In addition, elements of popular music are a structural feature in his musical universe: it has no borders, he makes use of whatever he needs. In Lilien's obituary in music magazine Mens en Melodie, Wouter Paap aptly wrote:

Ignace Lilien had a strong impulsive character, working relentlessly, with an abundance of passion and inspiration. He was less interested in form, always concerned with expressing his deepest emotions. His music has something exuberantly elemental. In this respect he was a strange bird in Holland's sedate musical aviary.

Lilien would have been delighted that the renowned Marya Freund, champion of the new vocal music of her time, often performed his Bettlerlieder, from Berlin and Paris, to New York.

In 1927 Lilien was stationed by the fcp in Reichenberg, Czechoslovakia, (now known as Libereč in the Czech Republic), an important European textile center. He was in charge of setting up laboratories for chemical coloring of textiles. There he married Toos Heinsbroek in 1929, whom he knew since his student days in Delft. They had two sons: Joris (1931) and Bob (1933). Lilien's two operas Beatrice and Catherine the Great, based on plays by Flemish writer Herman Teirlinck and George Bernard Shaw, respectively, date from this period. Beatrice premiered in 1928 in Antwerp, and was also successfully staged in Brussels, Ghent, The Hague, Prague, Bratislava, Reichenberg and Hannover. In 1932, his second opera, Die große Katharina premiered at the last Maifestspiele in Wiesbaden, just before the Nazis seized power.

In Reichenberg, he also wrote two distinctive song cycles: Mietskaserne (1932) and 20 songs on poems by Juljan Tuwim (1933). The four songs of Mietskaserne  set to his own lyrics, are full of compassion for the victims of desolate urban life. This subject is equally prominent in the poetry of the Polish-Jewish Juljan Tuwim (1894-1953), a leading figure of the experimental Skamander group.

Also remarkable is the Modern Times Sonata (originally Jazz Sonata), written in 1935 for violin and piano. The third movement, Rondo brésilien, gained such popularity that it was published separately in 1946. His publisher Basart reported that by 1958 more than 200 performances had taken place all over the world. Joris Lilien remembers that his father whisked him off to a café in the center of Reichenberg where a “Stehgeiger” (café violinist) was playing this work. Some sources claim that at this time Lilien took instrumentation lessons from Josef Suk in Prague. So far, we have not found any evidence of this.

Wartime in the Netherlands

When the circumstances in Reichenberg became too dangerous, the family returned to the Netherlands, settling in Vlaardingen, near Pernis. In 1939, Stefan Askenase performed Lilien's Cinq Nocturnes for piano and orchestra conducted by Ernest Ansermet in Scheveningen, in the presence of the composer.

However, the family soon had to move again. World War II broke out; by order of the occupying forces Lilien, as a foreigner, was not allowed to live near the coast, a strategically important area. The family ended up in a boarding house in Apeldoorn. Lilien worked part-time at the soap factory De Haas & Van Brero. This didn't mean his life wasn't in danger.  In 1942, as a reaction against his registration as a Jew, his mother, now living in Chicago, sent a certified document stating that her second (non Jewish) husband was Ignace's biological father. Up until now, no satisfactory explanation has been found for this affair, but in early 1943, Lilien's civil status showed that (only) two of his grandparents had been Jewish. Lilien never mentioned this again. It was in his nature not to look back, but live and work in the here and now. When a composition was completed and performed, it was a thing of the past and he simply moved on.

In Apeldoorn, Lilien wrote and published 35 Dutch Poems 1938-1941-1943, including the Ballad of Westerbork (1943). After the liberation he organized a festive concert. Instead of a fee, three transportation trucks were arranged to move his furniture and household items to The Hague. His Second Violin Sonata (1945), premiered by Willem Noske, was gratefully dedicated to Jos and Lex van Brero. The Liliens were the first new residents of the neighborhood Benoordenhout in The Hague, formerly a barricaded area. Lilien was commissioned to organize some cultural entertainment.  In 1947, his Fourth Symphony premiered in The Hague featuring a stunning nine-part triple fugue. The world premiere of his choral work Deux poèmes de Joachim du Bellay, written in 1948 for the Dutch Chamber Choir, was not performed until 2010 by Chamber Choir Ad Libitum under the direction of Frank de Groot.

Although Lilien resumed his work as a chemical engineer in Pernis, the family remained in The Hague. Son Joris remembers his father writing music in the evening while his mother read André Gide, Simone de Beauvoir and Jean-Paul Sartre and a book of Daumier's caricatures permanently on the coffee table.  At the end of the 1940s, Lilien studied Spanish, preparing himself for trips, on behalf of his employer, to South America. His music was now affected by South American influences, with songs on texts by eminent poets like Alfonsina Storni and Ildefonso Pereda Valdés.  The orchestral work Les palmes dans le vent (1950), with specific South-American rhythms and instrumental colors, is clearly inspired by his travels.

Lilien was fcp representative for the Benelux in the last years of his employment. This gave him the opportunity to regularly visit his old friend Stefan Askenase in Brussels and violinist Lola Bobescu and pianist Jacques Genty, a couple which played the first performance in 1955 of the Concerto for violin, piano and orchestra under the direction of Hein Jordans. Noteworthy from this period are the 24 Hiéroglyphes (1956), short musical methods encouraging improvisation at the piano. The cantata A Negro girl goes to school (1957-58) shows his great affinity to victims of all kinds of oppression. This popular work – about the first African-American enrolling in a white school in Little Rock (USA), provoking mass protests –  was performed in numerous schools, recorded on a LP and broadcasted on television. His love for experimental poetry is apparent in his Four poems by Lucebert for a cappella male choir composed in 1961.

Shortly after his retirement, Ignace Lilien died on May 10, 1964. 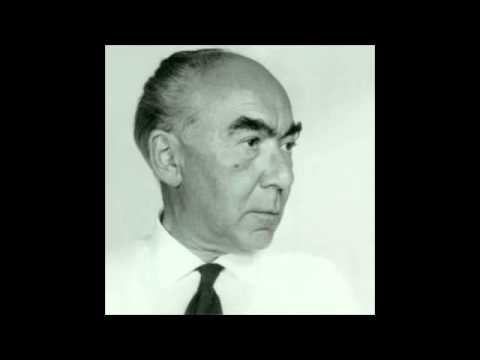 A website (in Dutch) on Ignace Lilien by Frans van Ruth, with many photos

Search for Ignace Lilien on amazon.com